Fitness Tip Tuesday – Blending vs. Juicing– Which One is Best for You?

Blending vs. Juicing – Which One is Best for You? 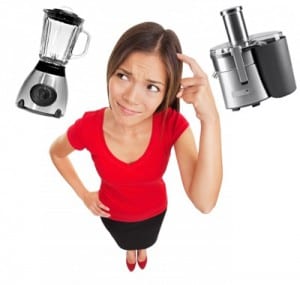 Juicing is getting lots of attention these days. Not too long ago, juicing was considered something that only the real health fanatics did. Of course, at one time Jack LaLanne, one of the earliest juicing advocates, was considered to be one of those fanatics. Now he’s in his 90’s and still in better shape than most people half his age. He doesn’t seem quite so different now and juicing is becoming very popular and more respected in the mainstream.

The Big Deal about Juicing

There are several things that make juicing such a popular choice these days. Vitamin deficiencies in the average American diet are causing people a ton of health problems and spurring a lot of spending on expensive vitamin supplements and “nutritional” drinks.

Women are incredibly busy today and looking for healthful ways to get nutrients into their bodies without a lot of fuss or time. They often need to get that nutrition on the run, too.

Women are learning that sluggish, overloaded digestive systems and digestive tracts filled with years of toxic build-up can result not only in serious inflammation throughout their bodies but an inability to lose body fat and build lean muscle. At the same time, juicing advocates are pointing out how effectively juicing fights inflammation and reboots both the metabolism and the digestive system.

These are just some of the reasons that women are eager to learn about and try juicing. Not all the information out there can be misleading and confusing. I’ve experienced firsthand how much of an impact juicing can have on fat loss, metabolism, energy levels and overall health. I’m going to explain why juicing is so amazing for you, what the differences are between juicing and blending and how you can use one or both to cleanse your system, jump-start fat loss and give yourself an incredible health boost.

What’s the Difference between Juicing and Blending?

You can get a lot of the same benefits, as far as nutrition and convenience, from both blending and juicing. However, there are some differences.

With a juicer, the whole fruit or vegetable is put into the juicer, usually including the peel, which is where many of the antioxidants and other important nutrients are. Then the juice is extracted, leaving the pulp or fiber behind.

With a blender, the pulp and juice are mashed together, rather than being separated from each other. You can strain or press the juice out if you like, but a lot of people don’t want to go to

that trouble. However, you still get a very healthy juice from whole foods, without the sugar, high-fructose corn syrup or other additives in commercial juices.

The biggest benefit of both of these methods is that you’re getting the extremely important health benefits of fresh fruits and vegetables, and getting more of them at one time than you normally can fit in by eating whole foods. So, both blending and juicing can be extremely beneficial but they each have their pros and cons. 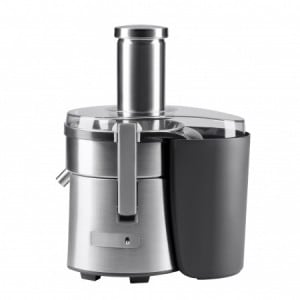 The Benefits of Juicing

The biggest advantage of juicing over blending is that when you remove the pulp (fiber) from whole fruits and vegetables, their nutrients are immediately available to your body. Because your body doesn’t have to digest the whole food (fresh fruits and vegetables are loaded with slow-to-digest fiber), the vitamins, minerals and antioxidants are whisked right off into your bloodstream. As a result, they are used by your body to fight fatigue, aging, inflammation, hormonal imbalances and a host of other issues.

Certain vegetables and fruits are high in carbohydrates and natural sugars. This includes most fruits, and vegetables like bell peppers, beets, parsnips and carrots. Without digestion to hold things up you can get an incredible energy rush from drinking the juices of these foods. Some people are able to give up coffee and tea when they start juicing because they get so much energy from the immediate uptake of natural sugars from their juice.

A Huge Dose of Antioxidants

Another huge benefit of juicing is that usually the peel of the fruit or vegetable is included when you juice. This means that you’re getting all of the antioxidant content of the food. This is one of the things that make juicing such a huge weapon against inflammation.

Inflammation is at the root of so many diseases and disorders that you should be considering it one of your biggest enemies. Inflammation can lead to heart disease, stroke, Alzheimer’s disease and even some forms of cancer. It will also weaken your immune system to such a degree that you fall victim to every cold or virus that comes your way.

Inflammation is caused primarily by nutritional deficiencies, oxidative stress and high-blood sugar. Very few of us get enough fresh fruits and vegetables to get all of the vitamins and minerals we need. At the same time, we’re taking in a ton of preservatives, unhealthy fats and toxins, all of which build up in our digestive systems and fat deposits. Because our digestive systems are compromised, we’re unable to absorb much of the vitamins and minerals in the healthy foods we are eating. It’s a really terrible cycle.

free radicals in line you need to be getting plenty of a wide variety of antioxidants and those are found in whole plant foods, which brings us right back to juicing.

One glass of carrot juice from your juicer is equal to about four cups of fresh carrots. Four cups! Because you’re leaving the solids out, you are getting the nutrients from all of those carrots in one serving of juice. This means that you can get a huge intake of a wide array of vitamins, antioxidants and minerals, without eating plate after plate piled with veggies and without taking expensive supplements.

The Drawbacks of Juicing

There are only a couple of drawbacks to juicing. How much an impact those drawbacks make depends on your budget, your goals, and your health concerns.

The Expense of a Juicer

While you can pick up a decent, basic blender for $25, a juicer will cost you quite a bit more. A decent juicer will cost you a minimum of $100-150 and can run much higher than that if you want one of the better models. Lesser models may not be able to handle the harder veggies, won’t extract as much juice and may operate at such a high rpm that it actually heats the food and causes a loss of some of the vitamin and antioxidant content.

Not a Substitute for Eating

Juicing is not a substitute for eating, unless you’re on a short cleansing or detox fast. Because you’re removing the fiber from fruits and vegetables, you are not going to fill up on your juice blends. While some plant foods are a decent source of protein, most aren’t. So you’re not going to be able to replace meals with the juice; the juice is a supplement.

The Benefits of Blending 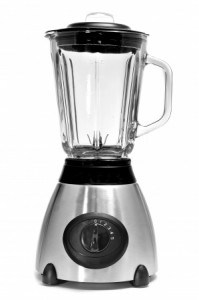 There are a few benefits to blending over juicing, especially if you are on a really tight budget. For one thing, you’ll be able to use your blender for a lot of other tasks, such as making dressings and sauces, protein shakes, and so on.

Blending Can Be Less Expensive

You can pick up a basic blender for as little as $25, though this blender isn’t going to be able to handle many of the tougher fresh fruits and veggies. Even so, if you go up a bit in your budget you can find a blender that will do a decent job.

Blending Can Give You More of a Meal

Because you’re not separating the pulp from the juice (unless you choose to press the juice out after blending), you will still be getting all of that filling fiber that’s in the whole foods. This makes for a thicker juice that is more like a smoothie, but that can be a good thing. You will get the fiber you need, stay full longer, and can add things like coconut milk or almond milk or even water and protein powder to make more of a meal.

The Downsides of Blending

Blending does have quite a few drawbacks, though it is still a great way to get plenty of fresh fruits and vegetables in your diet.

With a juicer, it’s pretty easy to drink a couple of heads of spinach in one glass. Not so with blending because you’re retaining all of those solids. So, you will need to do a lot more blending to get the same amount of nutrients that you would using a juicer.

If you are hoping to drink your fruits and veggies, you’re going to have to stick with soft varieties, remove the peels and hand-separate the juice. This is going to result in a lot less juice, but also fewer nutrients because so many valuable nutrients are contained in the peels or skins.

Blending Can Be Just as Expensive as Juicing

If you want more juice, more servings of fresh fruits and vegetables and more nutrients from the peels, you will want to get something like a VitaMix, which can be expensive. We own a VitaMix and can’t live without it. It handles all but the hardest vegetables with ease and reduces the produce to a much thinner consistency because it’s so powerful. A VitaMix can be costly for a tight budget but its well worth it in the end.

So Which Method is Best for You? 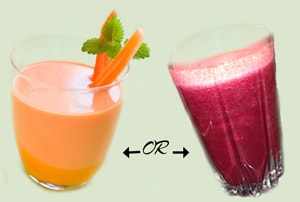 If you just want to get lots of fruits and vegetables into your diet without sitting down to platefuls of food, blending can be a great addition to your nutritional plan. It’s inexpensive, versatile and easy to do.

But if you’re suffering from the effects of chronic inflammation, have food sensitivities because of a sluggish or damaged digestive system or just want the maximum vitamin, antioxidant and

mineral intake possible, then you are better off with juicing. You will be amazed at how light, energetic and clean you feel with juicing. As a real bonus, you’ll also have a much easier time losing stubborn stored fat once your digestive system is functioning at optimal levels.

Whether you choose blending or juicing, you will be doing a great thing for your body. There simply is no easier way to get the minimum 10-15 servings of fresh fruits and vegetables that you need daily.

So check this out…my husband teamed up with Drew Canole (The Juice Master) to create a recipe book with 101 JUICING RECIPES. 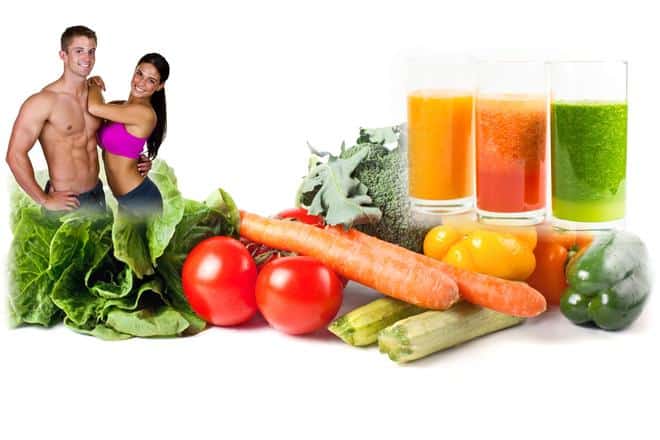 Vince has been juicing for me for almost a year now. He started when I became pregnant because he wanted the very best for our daughter and continues to juice every day now that I am breast feeding. The recipes are delicious and super nutritious.

If you aren’t juicing, you are MISSING OUT big time on nutrients that will give you longevity, energy, beautiful skin and actually help you build muscle and lose weight.

These 101 recipes are the EXACT recipes Vince and I use throughout the year and we have never became bored or had not even one, bad drink. Head on over to the page and check out what you get in this amazing juicing recipe book: 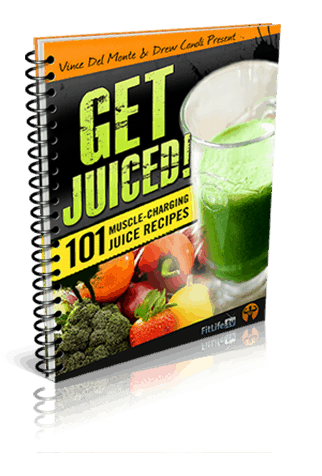