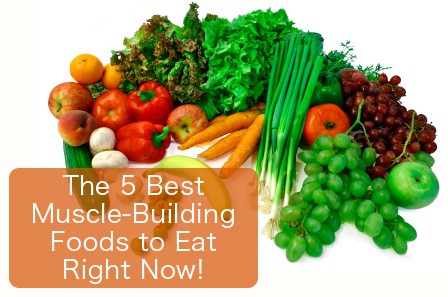 You may live in an area where it’s summer all year long, but for most of us, Spring has finally started arriving. If you’re making a conscious effort to eat locally and seasonally (and you should be), that means some of the most amazing muscle-building foods are showing up at your farmer’s markets, co-ops and grocery stores right now.

Eating local foods in their season ensures that you’re not only getting the best flavor but also the most nutrients. Storing and shipping fresh perishables allows many of the vitamins, minerals and antioxidants to deteriorate so getting them in season locally is easier and better for our health. Also, eating foods out of season or from great distances usually means you’re eating foods that have been heavily treated with pesticides and herbicides and then picked before they’re ready because it makes them easier to ship.

As much as is possible, you should be opting for foods that are being harvested in your area and in their proper season. Yes, that may mean that strawberries become a summer treat, but that’s what they were designed to be. Of course, there are going to be exceptions. If you live in an area where oranges or peaches can’t be grown successfully, you will have to get them from somewhere else. But try to make the majority of your foods as local and as seasonal as possible.

Right now, there are some fantastic foods coming to market that are especially good for helping you to build lean muscle. Go scoop them up and enjoy them as much as you can before they make way for the foods of summer.

Chickens raised on grass and allowed to follow their natural cycles usually stop laying during the winter or at least slow down dramatically. But once the young shoots of grass start popping out of the soil and the days have warmed up a bit, the birds are back out scratching and digging. Their eggs are incredibly rich in protein, Vitamin B-12 and Omega-3 fats because they have been nourished with fresh grass, the newly active earthworms and all of the other goodies chickens love to eat.

When you shop for pasture-raised eggs, make sure you’re buying the real deal. Commercial egg producers can put “pasture-raised” on their labels as long as they have at least one tiny fenced area for their birds. For some commercial operations, there might be a six-foot square open area for as many as a thousand hens!

Look for certified organic, 100% pasture-raised eggs at farmer’s markets and CSA farms in your area.

Dandelions might be a pain in the neck to flower gardeners and guys who make a hobby out of their lawns, but these weeds are actually a nutritional jackpot. They have more protein per ounce than spinach, 186% of your daily RDA for beta-carotene, more calcium than kale and nice healthy doses of manganese, phosphorous, magnesium and potassium. Dandelion greens are also known to contain several micronutrients (like chlorophyll) that help cleanse the liver.

The protein is an obvious benefit, but this selection of vitamins and minerals also supports muscle-building by promoting muscle recovery and by helping your liver to filter toxins (which reduces free radicals and oxidative stress) and produce or secrete several important anabolic hormones.

If you’ve never tried dandelion greens, they’re incredibly delicious and simple to make. Just saute them with some olive oil, salt, pepper and garlic or use them in any recipe calling for Swiss chard. They take just a few minutes to cook, so don’t overdo it.

Ask any gardener or vegetable farmer and they’ll tell you that asparagus is the star of spring. The harvest period is early and very short, making this delicious vegetable a real treasure to anyone who grows it. It should be a treasure to you, too. It’s loaded with Vitamin K for bone health, folate for protein synthesis and new muscle-cell growth and fiber to promote digestive health and blood sugar regulation.

Asparagus has a very high respiration rate, which continues even after it’s picked. This means a steady loss of micronutrients until it’s eaten. Try to eat it as soon as possible after you buy it and if you have to store it, store it with the buds wrapped in a damp paper towel.

Watercress is another veggie that has an extremely short harvest season, but it’s one of the first edible greens to pop up in the spring. Watercress contains more Vitamin C than an orange, more calcium than a glass of milk and more iron than spinach, making it far more valuable than your average green.

It’s also loaded with Vitamin K and has been used for centuries as a cleanser for the liver. Many people think that watercress is a lettuce, but it’s actually one of

the cruciferous veggies (like broccoli and cabbage) and its high glucosinolate content makes it very valuable for removing toxins from your system and reducing inflammation.

Watercress is great dressed with a little olive oil and vinegar all by itself, but you can also toss it into other salads and even add it at the last minute to your favorite soup. It’s delicious when added to scrambled eggs or an egg white omelet, but try to eat it raw as much as possible, as cooking destroys much of the glucosinolate content. Another great way to do that is to just toss it into your favorite smoothie or greens juice.

Onions, scallions and leeks are at their best in the spring; the occasional frost makes them that much sweeter. The allium family doesn’t get enough credit for their nutritional properties, but we’re starting to learn just how great they are for us. They provide allium and allyl disulphide, which have been shown to help regulate blood sugar and prevent diabetes.

They’re also loaded with manganese, quercetin (an antioxidant in the flavonoid group) and several polyphenols (phytonutrients) that are known to have several anti-inflammatory and anti-diabetic properties. Natural anti-inflammatory substances are important for building muscle because inflammation diverts resources needed for muscle recovery and even fat loss.

Onions are one of the few veggies that are just as nutritious cooked as they are raw, so enjoy them however you like. Much of the nutrient content from cooked onions transfers to the broth, sauce or drippings of whatever you’re cooking, so sop them up.

These are my top five favorite spring vegetables, but there are quite a few other delicious and extremely nutrient-dense foods being harvested early in the season. Artichokes are known to be an excellent pre-biotic (they feed the good bacteria in your digestive tract) and mushrooms are loaded with phytonutrients that support a healthy immune system.

Find out where your nearest farmer’s market is or Google CSA (community supported agriculture) farms in your area. These are both great sources for the best local, organic produce and meats in every season. Farmer’s markets are fun places to shop, they support small, local farmers and they’re a great way to get inspired to cook. Most Farmer’s market vendors are more than happy to share their favorite recipes for whatever you’re buying.

CSAs are a great way to do your food shopping. These farms raise a variety of fruits, vegetables, dairy and meats (some raise all of the above) and their customers receive crates and baskets of whatever was harvested that week. This means you get stuff at its peak, no matter what time of year it is.

CSAs work on a subscription basis – you usually sign up for the season (say, May to November) or for a certain number of weeks. Prices are based on the number of people in your family, but they’re usually very reasonable, especially given the quality. Once a week, your CSA delivers your food to a central location (like your farmer’s market) or you pick it up at the farm.

Our bodies were designed to eat seasonally and every season has its special treasures. By eating seasonally, we ensure we get a wide variety of antioxidants and other micronutrients and that our food contains the highest concentrations of those. Besides, the fresher and riper your food is, the better it tastes!